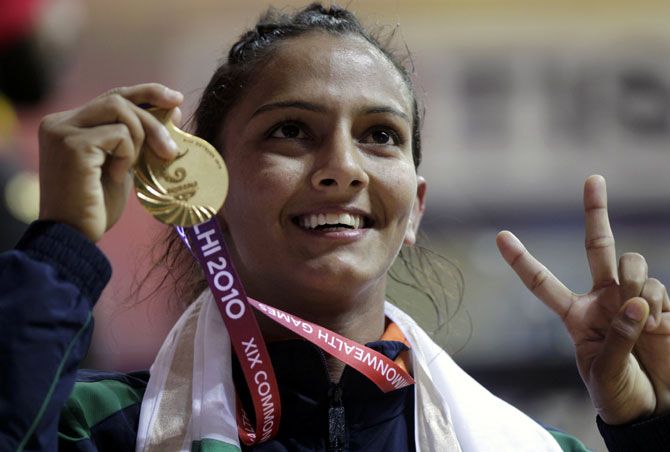 Geeta, first woman wrestler from India to qualify for the Olympics. Also, she is the first female wrestler from India who turned to be victorious as India’s first-ever gold medal in women’s wrestling in the 55kg freestyle category at the 2010 Commonwealth Games. She isn’t someone who has a very great approachable background or she isn’t born with the silver spoon.

It’s true that life isn’t a bed of roses. But even though it was not easy, she made it happen with all her determination, hard work, and vision. She was born and brought up in Balali village in the Bhiwani district in Haryana. Here are the few precious lines she also mentioned as she prepared herself for training. hard. Geeta tells, “It’s not possible to forget those initial 5-6 years of my training.

Those were the most difficult years. We had to work really hard be it scorching heat or cold winters. My father used to wake up at 3:30 in the morning and we had to practice in the akhada for three hours. Post which we went to school and on returning in the evening, we had to train again for 2-3 hours. The akhada and our father were the only two things we saw in our lives at that point.”

She also said, “We used to train with my cousins as there were no girls in this profession back then. There were a lot of times when we ended up fighting with the boys from our village. Around that time, my father felt even his daughters could be menacing wrestlers”.

Through this we can truly see how much she made efforts and worked hard to break the stereotypes and set an inspirational example.

Of course, it was not just overnight. Her journey actually speaks about perseverance and consistency. Because the place where she belongs is not so broad minded. So as a female she was mocked and ridiculed by all the people around. Because according to societal standards women should not do such things and just reside in the kitchen.

Little did they know, that time has changed. And even though she was ridiculed by the community, it didn’t deter her spirit.  Instead she became stronger and aimed high and took a leap to work harder.

Her daily schedule truly depicts how much effort. She put. She used to wake up before Sunrise at 4 am and  train for a total of 6 hours where she completely and selflessly dedicated herself 3 hours in the morning and 3 hours in the evening. She is someone who loves running.

Apart from that she made sure that she did HIIT which is a high intensity interval workout. It helps in strengthening the muscles, building endurance and increasing the overall performance of athletes. It includes workouts such as burpees, deadlifts and push-ups. And not just it, she used to do hardcore weight training too. It is the most basic part of her training to give strength to the arms, legs and core which is required for the defence.

She even inspires the youth of the nation to follow their dreams by determination and hard work. And yes a clear goal or vision should be there. Even though social media, we can see how much she kept up to date and shared her personal daily workout schedules and diet plans.

And not just it, she said a hard core training diet has to be maintained. “Everyone in my family, including me, avoids fatty, oily and spicy foods, “ she tells.

And can you imagine she hasn’t eaten any junk food for the past 15 years by now. This itself shows her ambition and her discipline. She tries to include maximum protein in her diet by consuming nuts and sprouts.

Her liquid intake is also high to keep her hydrated throughout her training sessions. She also mentioned, but loves all kinds of workouts but she loves her mat practice the most.

Also during Her interviews with well established media channels she mentioned, “ Geeta says, “Things are not going to change until Indian women, and their parents, stop being afraid of what society will say. Fear is the single biggest obstacle. The fear of what people will say and how this will shame their parents means that women are paralysed. My father, once he has decided on something, doesn’t care about what anyone else thinks. All the men in our family swore at him for training us. His parents said he was mad. But he didn’t listen.”

“My father gave us inner confidence. He taught us, as young girls, never to be scared. I feel that Indian women are too frightened. They all say, ‘I can’t do this, I can’t do that.’ Worse, their families don’t support them.”