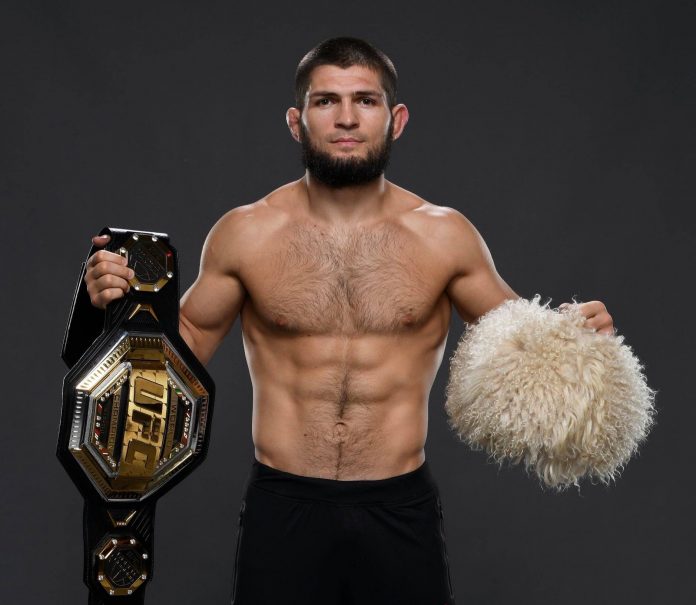 He is a very well-known and reputed mixed martial artist, who has competed in several forms like judo, wrestling, sambo, etc. He is majorly known for his record of a longest unbroken record of 27 wins in mixed martial arts (MMA). Also Currently, he fights in the lightweight division of the Ultimate Fight Championship. He has been trained in martial arts from a very young age. And through his stories, we can see that his dad must be his inspiration or ideal. As he developed an interest in the same seeing his father training his students. He has won numerous titles and is known for setting good examples among the youths to follow their passion with a clear goal, determination, and undoubtedly hard work & sweat.

Here are few of the achievements which made him victorious. In September 2008, Khabib made his debut in MMA. And within a short span of time that is within a month he secured four wins, of which three were in a day. And in the same following month, he won the inaugural Atrium Cup tournament championship in Moscow. He has a record of winning histories. He had 16 wins and no losses in any of the matches which eventually caught the attention of the Ultimate Fighting Championship (UFC). In 2011, he signed a six-fight agreement with The UFC. He entered the lightweight division.

There are many more. But of course, it was not such a smooth journey. He had to face certain setbacks, the pain too. Like He was affected due to knee and other injuries. He has to cancel and postpone the matches at times because of illness. But every time, he overcame and had a strong comeback. That’s why he is also known as “The Eagle”.  And also in an interview he mentioned this, “I have been fighting in the street and various tournaments since childhood and this experience and confidence help me quite a bit. And “Perhaps it’s in my genes because my father is an accomplished athlete as well.”.

His father was not just a father figure for him but also a coach on whom he can be dependent on.

This is one of the major reasons he always mentions his father as one of the greatest figures of support in his personal as well as professional life.

He is someone who doesn’t want to earn money and fame. And he also mentioned this in of his interviews, “

“If I fight and I become famous, now I can talk to people more. I can say, ‘Do this, this, and this,’ because a lot of people are watching. I want to be a good example, a good role model. You have to be [a champion] outside the cage too. This is my goal.”

His goal is not easy to achieve and he was aware of it. That’s why he chose to do it. And not just hard work, discipline but also his faith as a spiritual conviction played a very important role in establishing a good example. Truly a legend.